Today I thought I'd share some sketches from the picture book that I'm working on and show how the spread has evolved.

Let me begin by setting the scene.  The first part of this story takes place in the spring and the second part takes place one year later.  Between those two parts, there is one spread that ties them together and that is the spread that I'm going to share today.

The text talks about the main character, Charlie, starting school, attending story time, going to gym class, and then the passing of the seasons.  I really liked the idea of showing story time.  I thought it would make a nice image to have the teacher in a classroom setting with books and a globe, reading to a bunch of students sitting on the floor around her.

The problem with this image is that it doesn't convey the passing of time.  When a person reading the book turns that page, it has to feel like a year has passed and the above image doesn't convey that.

Showing some smaller spot illustrations helps to show the passing of time.  Since we go from fall, to winter, to spring, I decided to show one scene for each season.

I moved my story time sketch over to the left side of the spread and changed it to include a window so that a tree with fall leaves could be seen. On the right side of the spread, I drew two small spot illustrations.  After trying out many options, I decided to have Charlie and his friend making a snowman for the winter scene and Charlie jumping in a puddle for the spring scene.  I like the variety of showing Charlie interacting with another character and also showing him by himself. 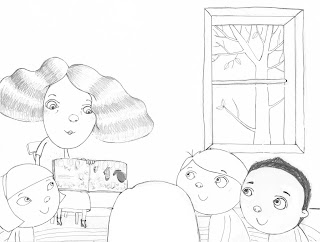 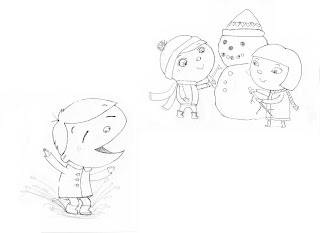 I'm still experimenting to see which layout works better with the text.